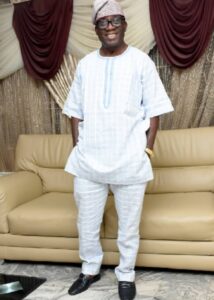 After his elementary education, he enrolled at the Annunciation Catholic School, Ikere-Ekiti in 1965. He passed out in 1969 with the West African School Certificate in flying colors.

Thereafter, in quick succession, he went through further trainings. He had hardly left the Nigerian Defence Academy in December 1972, when he started a course in Midshipman onboard NNS OBUMA (formerly NNS NIGERIA). He completed his training in October 1973

An officer whose thirst for knowledge could be described as insatiable, Navy Captain Olofin-Moyin proceeded to the prestigious Command and Staff College, Jaji in 1985, graduated in 1986. He later attended the National War College, Abuja, between 1997 and 1998.

Navy Captain Kayode Olofin-Moyin was appointed Military Administrator of Ogun State, Nigeria from August 1998 to May 1999 during the transitional regime of General Abdulsalami Abubakar, handing over power to the elected governor Olusegun Osoba at the start of the Nigerian Fourth Republic. He built a new Governors Lodge for Ogun State, opened on 27 April 1999 just before the handover to the civilian governor.